I Am HIV-Positive. This Is What It’s Like to Date

The Point Of No Return

First Time She Kissed Me

I Am HIV-Positive. This Is What It’s Like to Date 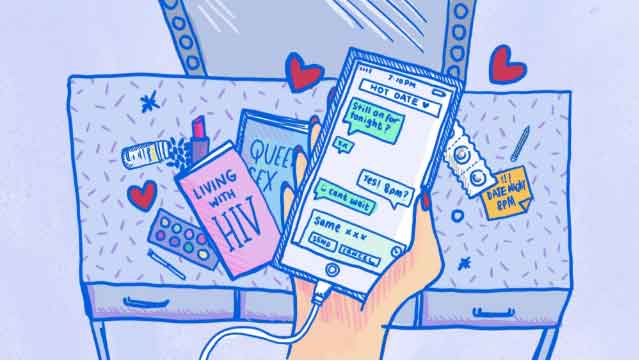 I found out I had HIV in a really weird way. My partner at the time became very ill and was rushed to hospital, and it turned out that they had a very serious AIDS-related illness. We’d been together for 10 years, been intravenous drug users together, and had unsafe sex many times, so I knew I had to have HIV too. This was in the early 90s, before HIV medication, when doctors would literally tell you that you were going to die. But I had to be positive for my partner, because they were really ill.

I did an HIV test and it came back positive. Back then, they’d give you a document that entitled you to certain benefits, and it said that you weren’t expected to live for more than six months. That was a very tough thing. It felt punishing. But I remember feeling tenacious: I was the first person in my family to go to college, and I told myself that if I was going to die, I was going to die with a degree.

It’s hard for people to fully appreciate what it was like before HIV medication. AIDS was seen as a plague that you had brought upon yourself, and you deserved to die, and you were going to die, so you wouldn’t be anyone’s problem for long. You were just going to be around for a short period of time, and disappear—as you should. That was the general feeling. It was difficult to live through that period of time. Even things like getting a doctor and dentist were hard, as they wouldn’t want to treat you. People didn’t want to touch us.

My college had never had anyone with HIV, and they wanted me to leave. They’d say things like, “What if you cut yourself?” People with HIV were told that they had toxic blood and that we needed to keep it in. I was doing a fine art and philosophy degree, and I stayed. My work became about being HIV positive. I’d make installations where I’d paint the walls of someone else’s installation white, or carpet the floor for them. They were invisible installations. Because that’s how I felt: like the world wanted me to be invisible, or go away, so the art was a way of existing in the world whilst simultaneously being hideously submissive and polite.

My partner survived, and we split up. At that time, my overriding memory is a sense of feeling like an outsider. None of us would want to feel like that, but I learned how to be an outsider. You’d go to people’s houses for dinner, and they’d watch me to make sure I didn’t accidentally pick up their glass. But I didn’t feel angry, not then—you become quite submissive. But what HIV did do was make me tenacious about sticking at university.

"The advice I would give to people who’ve just been diagnosed with HIV is: breathe. Give yourself time to let it sink in. Build a set of people around you that you really trust, and share it with them. Because it will feel like the end of everything, but it’s not."

It took me a really long time to date after being diagnosed. I enjoyed sex and wanted intimacy and to meet people, but I knew I’d have to tell them about my HIV status. When you’re a trans woman with HIV, there’s danger involved in telling prospective partners. I’ve had men respond incredibly aggressively. On the other side, sometimes I’d tell someone and they’d be completely fine with it, and I’d feel like I had to fall in love with them because they accepted me. A lot of people with HIV I know stayed in existing relationships, because it was easier. I mean, there were literally newspaper front pages saying, “Ship them all off to an island and let them die.” And you’re trying to date in that environment. That’s your label. You’re not reasonably attractive, funny, educated, bright, solvent. Those aren’t your labels. Your labels are: should be shipped off, you deserve to die. And you think, Do I tell somebody that’s my label? What if they find out?

I remember meeting someone I liked and wanted to have a relationship with, and I got other people involved to find out how they might react if they knew my diagnosis. When we did have sex, it was difficult because—even though I found them incredibly attractive—I was so worried. Mentally, I wasn’t there, because I was trying to make sure that everything would be fine with the condom and everything.

Even today, if I put “I’m a trans woman living with HIV” as my strapline on Tinder, I’d never get any hits. But I understand my body and how valuable I am in the world, and I find myself sexy and attractive. I also tend to find transmasculine people attractive, which is comforting, as I feel like I have my people and my community. So dating for me has become wonderfully exciting again, in my fifties.

As my viral load is undetectable, I don’t necessarily feel I have to tell potential partners I have HIV, as I can’t pass the virus on. Nowadays, it’s completely and utterly safe for someone who is on good medication and taking it robustly to have sex. One of the good things for young people who are diagnosed now is that they can become undetectable very quickly.

If someone were to reject me for being HIV positive, I would think, The world’s a really crappy place because of people like you. Why can’t people like you disappear? I think it's really important for long-term survivors of HIV to share their lessons with people. I’ve just started a global project called “Life and Love with HIV,” and it’s a platform for women around the globe to share essays about the experience of living and loving with HIV.

The advice I would give to people who’ve just been diagnosed with HIV is: breathe. Give yourself time to let it sink in. Build a set of people around you that you really trust, and share it with them. Because it will feel like the end of everything, but it’s not. Medication nowadays is brilliant—I’ve been on the same drug now for 17 years, and have hardly any side effects. And be kind to yourself. Because life’s too short to take on board other stuff that people want to put upon you.

This article and podcast were originally published on Broadly, a platform of VICE Magazine, on August 23, 2018, here.